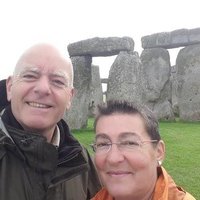 Sitting at home in the living room is not an option. 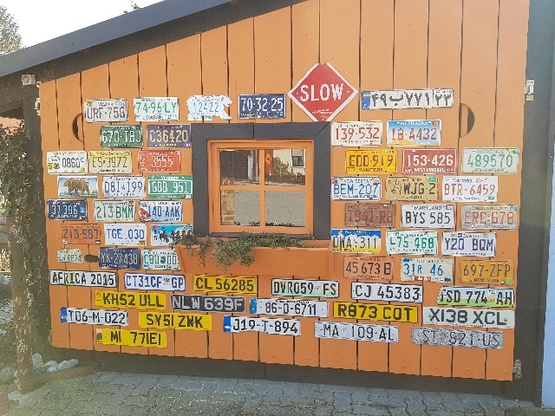 We are collecting license plates from where we have been. Foto shows our garage ... 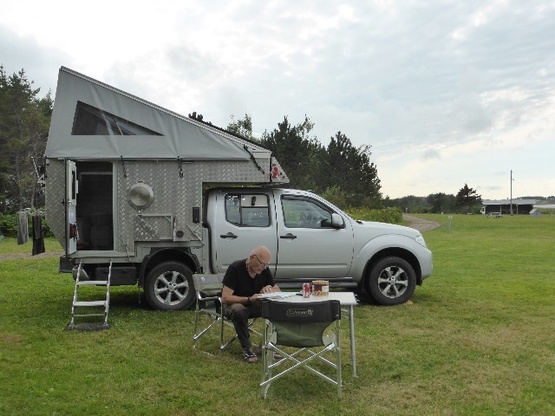 Our rig in overnight mode 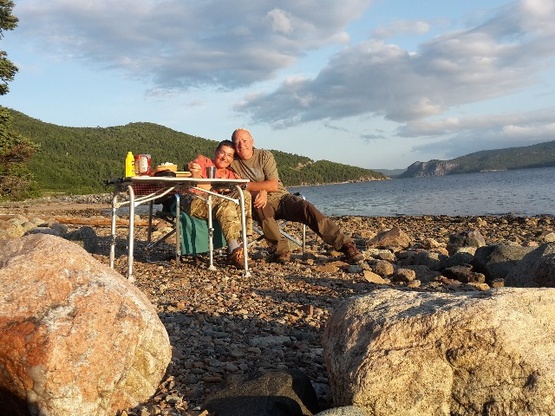 Most preferred mode: on our own ... 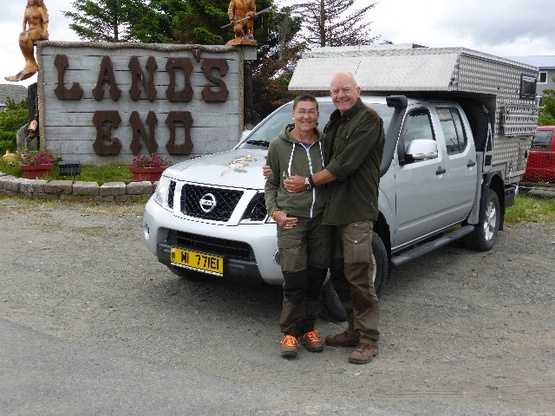 We and our rig in travelling mode

We are +/- 60 of youth. We love travelling North America and Europe with our small camper-van.
We are rather experienced campers; this way of cruising the world led us through wide parts of Europe, the northernmost and southernmost regions of Africa and - first time in 2013 - also the US and Canada. Crossed the continent from Alaska to Newfieland, from Key West to San Francisco.
Elli loves to cook, and Wolfgang loves to eat. While Elli is cooking, Wolfgang looks after our rig for the next day. When on the road, we try to steer clear of huge towns, seeking more the nature than congregations of people.
In 2017 we brought our campervan to Halifax from Europe. Halifax at the end of April - Washington/DC - Chicago - Seattle - Vancouver - Anchorage - Calgary - Montreal - Newfoundland and Labrador - Nova Scotia. Some nice places in between like Yellowstone and Denali elongated the trip until the end of September 2017.

The plan for 2019: Shipping to/from Halifax/NS, doing our farewell-tournée around the USA, picking the best of the rest. No ticking list any more, just enjoy country and people.

Since we and our rig is independent from any hook-ups, we love to stay off from KOA and similar campgrounds.

A small village at the Austrian boarder to Czech Republic and Slovakia. One of the many ends of the world, thanks God. 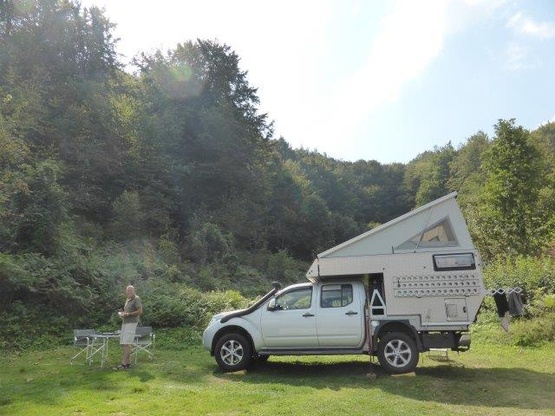 NISSAN Frontier (in Europe "Navara" with a diesel-engine) with pop-up-top cabin on the back, less than 20´ (6m) long, 2015 build, no slide outs but stove (LPG) outside if weather conditions will allow ;-) We are 100% independent from hook-ups.

Nice folks. Exactly the kind of people you want to host. No complaints, totally pleasant people!

Elli and Wolfgang were a pleasure to host! They were fully self-sufficient and did their own thing but allowed some time to visit and get to know each other. We enjoyed visiting with them and sharing stories of our travels. We hope to see them again and welcome them back here anytime.

We thoroughly enjoyed meeting Ellie and Wolfgang over the short period they were docked here. Good story swapping and conversation. They're welcome back anytime they're back in So Cal area.

Guests that are great! They are welcome back anytime.

Ellie and Wolfgang are genuine and among the most interesting people we’ve hosted. World travelers in a very unique rig. We would love to have them back!

We would recommend to any host. They left the place like they found it. They are welcome back

A Great Blessing We Are Glad We Did Not Miss!

We are so happy we had the privilege of hosting this amazing couple at Candy Cane Corral! We thoroughly enjoyed getting acquainted and hearing about their homeland, Austria, across the sea. They are so interesting and talented and we feel so enriched to have them in our home. We wish them safe travels as they trek across our great land. We will never forget them even though we met them for only one day! God Bless You Both! Perry, Ginny, & Georgia.

EliWolfgang couldn't have been more wonderful guests. We had a nice time talking about their world travels and their home country of Austria. They l have a great setup and it was great seeing them enjoying their morning time sitting out before proceeding on their journey. We would welcome them back any time.

It was a short visit but they were a pleasure to host.

Elli and Wolf were absolutely delightful guests with no demands, requests or impositions. Indeed, if we did not make an effort to invite them to visit with us, we would have hardly known they were on our property boondocking.
They are certainly welcome to return again whenever in the area.

What a pleasure it was to meet these world travelers, we would welcome them back at any time. So interesting and what a great little camper! Fair winds to them!

These two were such a pleasure! So glad they picked us to stay with. We were able to have some nice chats and a shared glass of wine by the fire. Lovely couple who we hope to see again someday. We would not hesitate in accepting their request for boondocking. They are an adventurous duo that know that life is fleeting and one must live in the moment. Happy trails to them on their adventure together!

Great couple they shared their travel experiences from many parts of the world. They travel in a most impressive custom rig. It was a pleasure to have hosted them.

We had ElliWolfgang for two nights and what a pleasure it was!
These two travellers have amazing camping ethics and knowledge and stories of most countries you'd want to visit. It's just to bad they didn't stay a little longer as would love to hear more of their travel adventures as well as about the country they live in.
We wish them safe travels on their journey home and highly recommend them to fellow Boondocker hosts!

We enjoyed hosting Elli & Wolfgang. World travellers with stories to share of the many places they have travelled to in their home built rig.
Would love to have them come and visit again.

This couple was very personable, but also happy to do their own thing. They were self contained and needed no hookups. They were also very nice and interesting to talk to. They are welcome here anytime!
*****