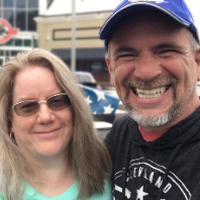 We are Ken and Tez (Teresa) from upstate New York.

Our story is familiar but unique, like us. High school sweethearts that went our separate ways to live and learn and grow. Stayed friends; moved away; had kids; had heartbreak. 30 years later; our connection strong, we dive into one another. Its a kindred relationship that is not without its pitfalls. We have our rough patches that give us a better appreciation for each other, but when the sun sets over the hills of Southern New York (soon to be anywhere USA) we come together to do it all over again.

Tez is a certified Medical Coder who works remotely, which makes it very convenient to continue to work while traveling all over the country.
Ken is a graphic designer, who also can work from anywhere!
We also LOVE genealogy research and hope to incorporate this into our travels, as well.

We have a 3 year old lab/shepard mix puppy named Chase and a 7 year old tiger tabby cat named Gracie. Gracie has become a mouthy little cat, but the biggest mouth of all is Chase. He may seem like he's ready to go full on ninja, but as they say his bark (heavy and forceful) is worse than his need for confrontation.

Our advice: Don't stare at him, he thinks your sizing him up for a fluffy rug. Reaching out to him, to show friendship, is just another threat to him and he doesn't want to end up as a fluffy rug in front of your fireplace. Just ignore his presence and he will sniff you and get to know you on his own terms. a softer voice tends to win him over after he has cleared you for "Fluffy Area Rug Threat"

Gracie requires no advice... just a handy bottle of Advil or Tylenol.

We are just getting started with full-time RVing.... the Candy Cane Corral in New Boston, TX was a nice spot

We are from the Binghamton area in upstate New York 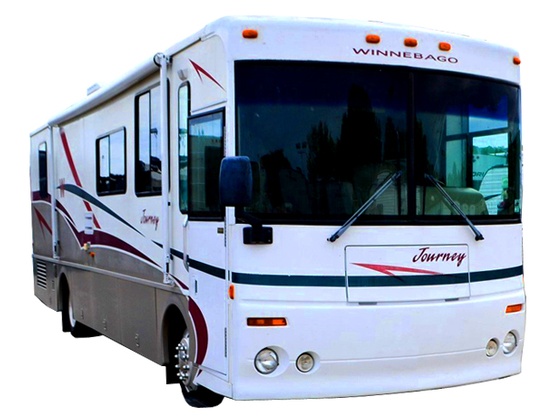 2000 Winnebago Journey. We do not tow a vehicle, as yet. However, Ken drives the RV and Tez follows in a Trailblazer SUV.

Very quiet couple and their dog was well behaved. They are welcome back anytime.

We barely knew that these folks were even here! Quiet, respectful, and very friendly is how I would describe T and K and their pets! We asked them to come back any time. They were perfect guests and we wish them safe travels!!

These folks were here on days that were very hot and muggy and so we did not have comfortable times to visit very much. We would have really enjoyed sitting out in the evening and sharing stories. With that said, they communicated very well, were very kind, pleasant and enjoyable to host. We wish them safe travels and hope that they will return sometime in the future so we can have those chats. You would enjoy having them as guests!

I appreciated the advice from them. Great couple. Very quiet.

What A Delight To Host These Guests!

We enjoyed hosting this couple at Candy Cane Corral. We did not have a lot of opportunity to interact with them because of the COVID19 virus and the rain but look forward to return visits when things will be more normal. We wish them Godspeed and safe travels until they come again.

They were visiting family in the area and we didn’t get to visit too much but are definitely welcome back anytime!

Was not able to spend any time with them due to all the tree damage we’ve had around here. Have safe travels

Ron was a little more outgoing and his adorable bride was a little more attached to there coach.They did
there research on our property and the surrounding community and used the resources at hand.They are becoming pros at boondocking.It was nice that we were able to hear there story and to talk about the travel plans.
We hope to spend more time traveling after this stupid virus is over.

Lovely family. We would invite them back anytime.

With this China Bug we could not spend as much time visiting. These are good folks and very respectful. I hope they can come back again for a longer visit. I would highly recommend them.

Great guests. We wish we could have interacted more, but our own busy life was in the way!

Likable and adventurous couple just starting to venture into the world of full time RVing. With the added incentive of nascar racing and good barbecue, to spur them on, they will have a very joyous time in the RV life style. I would not hesitate hosting them again in future.

It was a pleasure to meet this couple and share our spot with them. They were kind and considerate and a pleasure to get to know.
Would gladly host them again if their travels take them through here.
Highly reccomend!