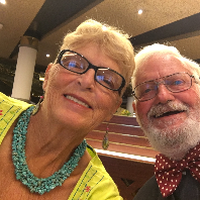 Sailors who winter in Mexico and camp in the summer.

Ben and I are new to RVing and spent summer 2019 traveling cross country in our Chalet. We need to be frugal and enjoy meeting hosts.

SF East Bay and the Pacific coast of Mexico 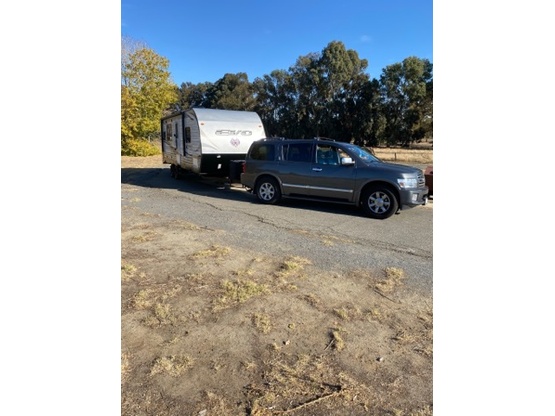 A pleasure to meet BeaMewesed. Very kind travelers, the kind of travelers I like to help and host. Snoopy is a explorer and kept my dog Alaska entertained. Happy Travels and see you soon.👍

Hit our garage door and left. And more...

I do not want to leave a negative review, I’ve never done it before, I’ve never had to, but this was not a good experience. I know they left us a nice review, and I appreciate that, but I feel that other people who may host these folks in the future need to know.
First of all, after 4 messages asking to make sure that their trailer was less than 20’ (because that’s as big as our driveway is), they never answered. The wife did finally message to let us know that they were almost here. Once they got here, she conveniently remembered that they had a luggage rack in the receiver hitch of their trailer. I told her it would have to come off in order for the trailer to fit in the driveway without the tongue sticking out into the road... she deferred me to her husband. He is not polite. I’m just putting that out there to start. I told him that it was an extremely simple thing to do, my boyfriend and I would take it out for them and put it down on the driveway under the back of the trailer, it will take no more than two minutes. (I have the same rack, super simple to do, even with their stuff on it). He refused. We put our garage door up so that there was room for them to back up as much as they possibly could go and we would still be able to put our garage door back down. Still, I n the end, he won... he wouldn’t take the rack off and they were sticking out over a foot into the street. They also had their tow vehicle absolutely packed to the ceiling inside and the luggage rack on top as well, so they wanted to take the other spot in your driveway for their tow vehicle. I was more than happy to oblige because I didn’t want their truck being broken into or things being stolen off of it if they parked on the street.
The rest is just nonsense. The husband was rude. He was mean to his wife in front of us. He let his (small, elderly, adorable) dog roam freely around on the lawn, on the street, and up the neighbors’ sidewalks. And yes, we did have to clean up dog poop off their lawn after they left. I personally brought the confused little guy back to him 2 times. He was super weird about dumping his composting toilet in the Organics Bin that was already out on the street for garbage day. He wasn’t wearing a mask and seemed genuinely upset that I wouldn’t let him inside our house to dump it down the toilet (I also use the same “Luggable Loo” as them and it gets dumped in the Organics Bin). While they were here they spent 1/2 a day cleaning out their trailer- all over our lawn(!!). That was ridiculous. There are a few more silly things, but the big problem is that when they left, they didn’t let me know (like I asked them to so I could put the garage door up again for them so there would be extra room for them while hooking up their tow vehicle again). So, of course he pushed the trailer back into our garage door. And then just left. So now the aluminum garage door has 2 punctures in it from the damn cargo rack.

I think the worst part was the husband’s attitude and that he just let his dog roam freely. But although the wife was quite nice and friendly, I’m really disappointed that she saw the actual damage being done when he backed into the garage door, and said nothing to us. They just left.

We didn’t notice the damage until the next day, and that’s when we went back and looked on our security cameras and saw what had happened. And we also saw his poor dog wondering around on the videos. I’m an animal person, and that’s just pisses me off.

Every single Boondocker that has stayed here has been great. THIS was not. I’m disappointed in the wife. And the husband was just a rude. I would NEVER behave like this on someone’s property- especially a driveway.
I hope they see this review and adjust their behavior accordingly. I do not expect that they will offer to pay for the damages. But they are nonsense will forever be encapsulated on video… #FunnyButNotFunny.

There. My first- and hopefully only, negative review.

We had a short but very pleasant one night visit with Lucie and Ben due to COVID-19. We practiced social distancing so we weren't able to share a meal as we usually like to do. They had to leave early the next day as they had a long drive ahead of them. Hope we can visit again in the future.

Repeat guests! I am glad I could accommodate them. very enjoyable, helpful guests. Hope to run into them down the road!

great to host them again!

very helpful and super kind. they are welcome again!

great guests, very helpful and fun. We shared interesting stories and suggestions while enjoying the sunset from my porch. they are welcome any time!

beamewesed and Snoopy are sweet!
very interesting, lots of sharing. welcomee back anytime!