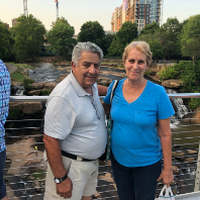 Wife and I are both Sea Captain and have sailed around the world, worked on boat in the Carribean and South America, and Italy

Pam and I had a food vending trailor in Florida because of our fondness for fresh Seafood from up in New England, we started a company called Whaling City SeafoodMy home town was known as the Whaling city New Bedford, Pam was a computer programmer for Ma Bell and when I met her in Boston, I had a refrigeration company, but we decided to change our lifestyles and we bought a 47' Cheoy Lee Ketch called Gwei-Lo and we brought it to St Thomas and did charters in the Virgin Islands. Pam now has a tutoring business educationing elderly people with their computers.

2 cats Silly and Puddy, both 15 years old They are indoor cats and have interesting personalities

When we got off boats for a while, we left Thailland and had my daughter who lives in Monterey Calif locate a motorhome I saw online that was for sale, she met the owners and took a bunch of Pics and sent them to me, I then bought the Southwind MH, flew to San Francisco, my daughter picked us up at the airport and brought us to the MH where we provisioned and outfitted it and after a brief visit with her we left and headed to Florida to visit some friends and my brother who has a Ranch in Ocala, we then traveled up to New England to go to a wedding then back to Florida where we decided to work at Disney. months later we headed down to Naples to visit some friends who were also sea Captains in Naples and we fell in love with that area. We have seen, worked,and traveled through so much of the world but our own country we have saved for last! That is what we are doing now

Born in New Bedford, Ma but live now in Naples, Fl. where I worked as a Tow Boat Captain, Ran airboats in the Everglades and played with Aligators, most recently (last ten years) worked repairing and installing espresso and coffee machines and equipment. 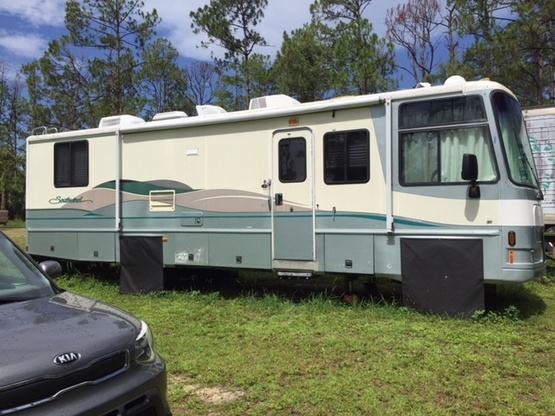 glad to see these folks again welcome back anytime

Come back any time!

A very nice couple! We would welcome them back anytime🌞

Sorry we missed you

I trust my family was able to make you feel welcome.

welcome back from their trip, they stopped on their way home glad to see them and share their experience , had a nice dinner at bob evans with another rv couple, welcome back anytime

enjoyed gene and pams visit with us . we shared lots of stories and adventures. and I feel like we became friends they are welcome back anytime

Would love to have you visit again when you are in the area.

G and P arrived exactly when they said they were coming. They got settled in minutes and were off finding all the small gems of our little towns, including finding Aunt Bee's grave from Andy Griffin. Had a fun chat with them, learned a lot in a short amount of time. They were the perfect guests and I hope our paths cross again.

We enjoyed the opportunity to meet this nice couple, our visit was very short but sweet.

Another very interesting couple We really enjoyed the time we visited with G and P. They sure have had an adventurous life compared to us. I am just amazed at how people enter our lives as complete strangers and in a couple days leave as friends. They are welcome back at any time. Hopefully we can meet up with them this winter in Florida.

We had such fun with this well travelled couple. Loved the stories they shared especially the sailing stories.
Looking forward to seeing them again.