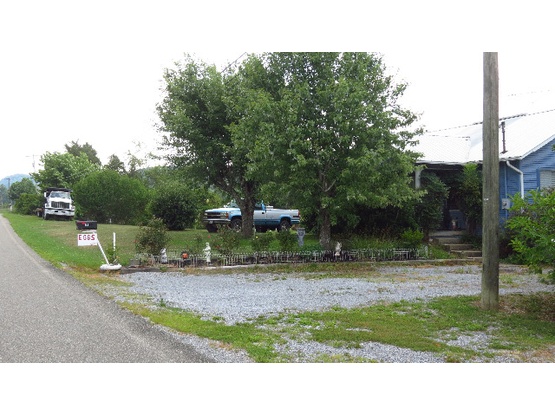 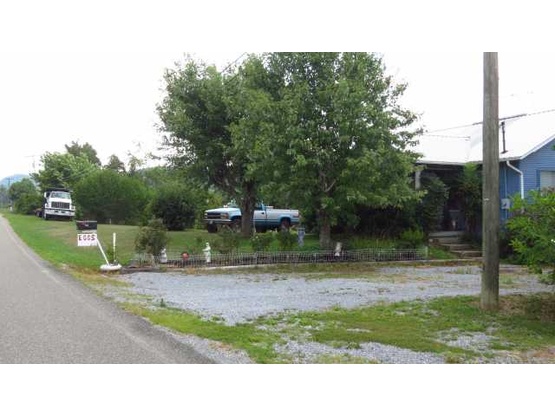 PULL OVER GRAVEL / GRASS SPOT BESIDE PAVED COUNTY ROAD WHERE WHITE TRUCK WAS IN PIC, AT THE EDGE OF MY YARD / GARDEN BESIDE OLD CATTLE CORRAL (not used anymore) MOSTLY PRETTY QUITE AND LOW TRAFFIC.
The bad reference i have was left in retaliation days after i left them a reference. I think most guests will understand.

NO LOUD NOISE, NO DRUGS, PETS ON LEASH & PICK UP AFTER THEM. YOU MUST BE RESPECTFUL AND FULLY RESPONSIBLE FOR YOURSELF. NO GENERATORS AFTER 9 PM. THIS SPOT IS BESIDE A COUNTY ROAD SO PETS AND CHILDREN NEED TO BE WATCHED CAREFULLY. PHONE AND LET US KNOW ABOUT YOUR ESTAMATED ARRIVAL TIME, WE WILL SHOW YOU THE PARKING SPOT.

1 1/2 MILE 2 LANE PAVED LOOP ROAD OFF 19E A 4 LANE ROAD. LOCAL SEMIS USE THIS ROAD FOR DELIVERIES SO ANY RIG SHOULD NOT HAVE A PROBLEM.

PARKING ALL IN SAME SPOT

PRETTY MUCH ANYTIME, JUST BE SURE TO CHECK FIRST. EASY STOP FOR A DAY OR JUST A QUITE NIGHT OF SLEEP. IF YOU ARE RUNNING LATE AND ARRIVE LATER IN THE EVENING THAT IS NO PROBLEM. SMALL 10 AMP ELECTRIC FOR YOUR FAN OR COFFEE POT AVABILE.
PARKING THE WEEK BEFORE THE BRISTOL RACE IS USUALLY TAKEN BY PAYING RV'ERS.
"We do a lot of last minute trips in the summer, but feel free to give us a shout and see if we can accommodate you." 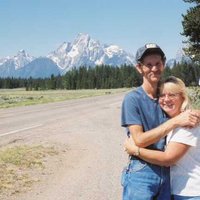 The directions Robert gave me by phone were great! And bc we didn't arrive until just dark, he came out & directed us to the spot. He also had an extension cord ready for us to plug in for electricity. It was 29° at 6 pm & only going to get colder! 43° in the RV! So we were VERY THANKFUL for electricity to run our propane furnace! Robert & his wife are gracious hosts & we look forward to returning when we are traveling this way again!

We were extremely thrilled with our stay! The couple is a joy to meet and visit with :) Robert even went out of his way to help us fix an issue with our rig! We were given coffee and a blessing! Will visit again!

We had planned on spending 5 nights at this property but ended up finding other accommodations because we felt so unwelcome. After confirming the dates of our stay, the host never responded to any form of communication again. He did not return our phone calls, texts, or emails. On arrival, we attempted to reach out to the host, and when we did not hear back, we assumed he was not home (the place looked deserted). We set up where the email and provided photo indicated, as we had a confirmed stay and were certain we would hear back eventually. When we decided to cut our stay short, we emailed the host thanking him for the 2 nights and letting him know we would be departing the following morning. We were not sure if his phone was working, since we had not received any response, so we used the only avenue of communication left—the Boondockers Welcome platform. We still heard nothing and never saw him at the property. Several days after our stay, we received a negative review from the host that was insulting, ignorant, and inaccurate and will taint our so-far stellar reputation. He berated us for using the Boondockers Welcome platform to try to communicate with him, even though we had no idea what else to do (and this IS the mutual platform we used for this specific purpose). He claimed we set up in the wrong place (we went by the information HE provided and would have happily moved if asked) and that we used his electricity (we did not; we used our own generator and we respectfully turned it off by 10 PM each night). He claimed we left without notice (see above re: the email we sent). It turns out he was home the entire time and never stepped outside to say hello or welcome us in any way. What kind of “host” does that? When we received his review, we reached out directly to try to clear up the obvious misunderstanding. Again, he never responded to our calls or email. We had fully intended on not leaving a review because we honestly had no idea what his story was – Did he have a family emergency and have to go out of town? Was he ill? – and we did not want to tarnish his reputation without a full understanding of the situation. Since he is unwilling to communicate with us, we have no choice but to let prospective guests know what to expect with this host. We 100% do not recommend this host due to his complete lack of communication and incredibly rude behavior.

Great place just off the highway. I will stay here again. Host is very friendly.

Parked parallel close to the road, there’s a bit of a hill on the other side. Host was great, we just stayed for a quick overnight.

This was our first Boondockers Welcome and it was a great experience. The location is conveniently located to Elizabethon, Johnson City, Jonesboro and even a Bristol -all of the places we wanted to see. This location is very close to the road, but we found it very quiet and fairly level. It overlooks a very pretty field. The hosts were great to deal with and allowed us to stay, even though they weren’t home until our last day ( we stayed 3 nights). The host recommended a great bbq place right down the road, and he was right!
Thank you to our hosts for letting us stay on your property. We appreciate your generosity and would definitely stay in this spot again.

What a great location close to Bristol. Host kindly recommendation s for lunch and seeing Bristol where spot on. Truly enjoyed our kind host and a nice evening.

Wow what hospitality! Very friendly, entertaining and so knowledgeable about RVs, mechanics, travel well everything!
Thank you so much for your friendship, advice, strawberries, electric and good wishes!

Where do we start? Awesome hosts! Perfect location for visiting family in area. He is a wealth of knowledge on the area and traveling out west. Will definitely stay again when in the area. He handmade a tool to fix the shimmy on the hitch mount bike rack. Very welcoming and friendly 😊

They took us into their home, and showed us several places to see on our travels. You don't find many hosts like that. They know a lot when it comes to visit places. As a matter of fact we need to get in touch with them when we head out this spring.

A great couple! Had a fun conversation covering many topics. Our host was entertaining and full of knowledge. We definitely learned a few things! Wish we could have had more time with them, but we we’re on the move. Parking was level and easy. They were also very quick to respond, which was great because we intended to go further, but just needed to stop somewhere. We’ll definitely stop back when in the area again!

Can't say enough kind things about this couple. Bob will make you laugh, and almost cry at some of the things he replies to you. Loretta is so warm, we only wish we could have spent more time with them. On our way to visit grandson in Virginia. Will return.

What a great couple

Pamm and I enjoyed our stay with Bob and Loretta, you won't find a more warm and wonderful pair of humans on this planet. We could have talked for hours, maybe days. He shared so many "go see this" place around the US, and even which way to travel to see them. (driving north or south). He showed me many tricks to fixing some of my problems with my rig, and where to get the best barbaque within 1 mile from his house. I tried to pick him up a sandwich, but Loretta had steak in the oven, so he made me take the extra sandwish on the road with us. I told him I would get up at 6 the next day, but we slept like babies and didn't get up until 10 AM. It was alright with Bob, he had more great stories that morning. We had so much fun with them. We made a friend. We will be back!!!!!

We felt like family around Loretta & Robert.. They were so nice to be around and both very helpful.. Robert is so funny !!!He shared some of his travels with us..We had planned on staying 3 days, but there was a NASCAR race not far from their home and My husband is a big fan so we decided to stay at the racetrack .
I highly recommended you stop at their home would loved to have stayed longer..
Thank you Robert & Loretta for your kindness..
Maybe we can visit another time..

They made me feel welcome. Great location. Country. But close to shops. .
I sleep like a baby.

These folk are Bon-a-fide good people. Think I found a brother from another mother. :) His bride is just as nice.

Robert and Loretta we very sweet and helpful. Space was a little hard to get my truck camper level on as I also have 2 slides, and it was dark when I got there finally. It was also a bit noisy with a factory that is a mill nearby somewhere. But around midnight I thought they stopped as I went to sleep. However Robert told me the next day that they didn’t stop, I must have just fallen asleep. He is hard of hearing so he can’t hear it he stated. Lol. Well it didn’t bother me.

Note: the site is pretty level for vehicles that aren’t 8 feet wide like mine is.

I learned some important history from the as well. I like that about Boondocking! I learn from everywhere I have stayed.

Thanks Robert and Loretta! Merry Christmas to you both!

We had a great stay at 10EC Launch Pad. From guiding us into our spot to letting us know about some local sights they were super helpful. We hope our travels take us back sometime soon. Great folks.

Your life may not be the same once you’ve been a guest of these folks ... Sometimes life’s greatest adventures are just parking and visiting... I will remember this stay for the wrest of my life
... with much laughter and fondness...

Special thanks for letting my daughter park at their home while she travels around the US and for giving her some great ideas of where to visit in the West. It makes a Mom feel better to know such nice people are willing to share their time and home.

I needed a place to park safely on my way north. Thank heavens for 10EC (Robert/Loretta) for responding to my request and giving me a safe place to park and sleep for the night. It was dark and raining when I arrived - very convenient right off of US19E -- and Robert helped me get parked and we chatted briefly. If you are anywhere near them -- I recommend you stop at their place.

Robert and Loretta were very nice folks. He was out by the road when we arrived after dark with a flashlight so we would not go by his place. Robert installed two new deep cycle batteries to replace my old ones. He would not take any money for his work and it took several hours including the trip to Johnson City, TN to pick up the batteries. We plan to go back sometime in the near future to see these nice folks.