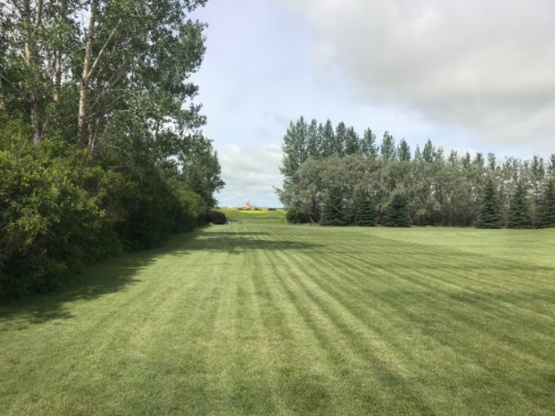 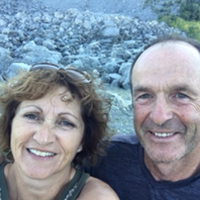 We were greated by the friendly Host and directed to the area for our overnight stay. Later in the evening they visited our MH and we found that we had a number of life experiences in common. We enjoyed sitting outside and taking in the peaceful surroundings. We appreciate that Sunset View is an available Boondocker location.

Kevin was a very kind and hospitable host. The parking spot was very level and the setting was terrific. An opening in the trees to an open field and a beautiful sunset. Highly recommend staying here! Very peaceful and close to town.

Lovely people! Unfortunately too overcast for the sunset view but the fields of Durham wheat more than made up for that. We appreciated their kind hospitality and we’re sorry we missed the chance to visit with them a bit more!!!

Very gracious folks. Our host welcomed us and directed us to a choice of locations out of the sun and strong winds. We enjoyed visiting with them and hope we have the opportunity to cross paths again. We would 100% recommend staying with or hosting them.

Beautiful, peaceful site with a stunning view. Lovely hosts and wonderful hospitality. Many thanks for sharing your space with us!

We had a lovely stay , Kevin and Mary are super host!! The farm was easy to find , beautiful spot with nice open space , incredible sunset . They gave us lots of suggestions and shared great ideas for our trip . We would recommend 100% to stay here . They even showed us a great place to play pickle ball which we enjoyed. Thanks to both of you for a great experience, we would definitely come back . Kevin and Mary know how to enjoy life , this was something we have in common 😉

NOT a good experience!

We requested a stay at this site as it clearly advertised electrical power and the requested fee. It was a cold night coming up and we needed heat.

Starting way before arrival, we offered more than once not to come, as road conditions had slowed us down badly, and the time was getting late. We would have found a regular campspot earlier along the way. The male host urged us to come.

On arrival about sunset, the host led us in his truck off the steep sided edge of the driveway through a gully, then along a rough trail to an opening in the bush. When he appeared about to leave, we asked where the power plug was. He said he did not provide power. We said the listing on the website said he did, and the cost. He denied this. We said we must leave then. He then said he would provide power.

He then left, going far ahead of us. We did not know the best route back onto the drive, and at one point developed a dangerous tilt to our motorcoach, which took some careful work before it tipped to correct.

We got to the yard, well beyond where we had been led off the road, plugged in, and stayed only long enough to be able to leave at first light of day. We left the fee for power in the mailbox, and sent a message to let them know. In a brief reply the host admitted power had been advertised, but was now removed from the listing.

We would never stay here again, and would not recommend that anyone else stay here either.