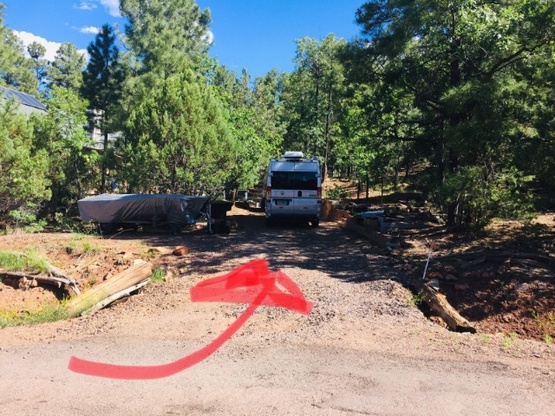 The back driveway is the 3rd one on the property and is the most level to pull straight in or to back in--either one is fine with us. You can use the neighbor's driveway to get started, our road is a cul de sac so no problems with traffic. 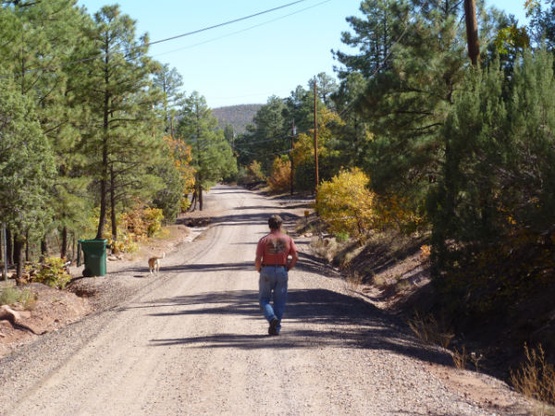 Walking down Ponderosa Road towards White Mtn. Road. We're the first road in the subdivision, you just continue straight off of Timberland Road on to Ponderosa. This was when it was dirt, but it's now chip-sealed. 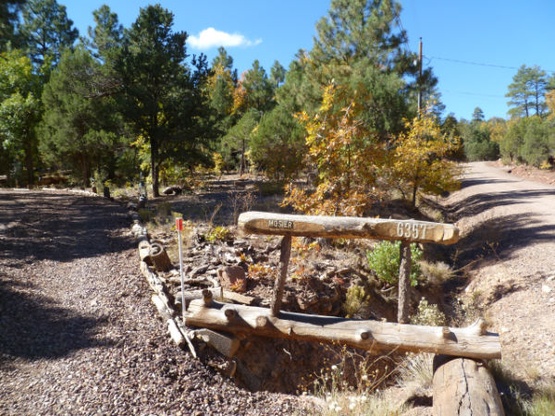 This used to be at our main driveway--but it collapsed....working on a new version. Ponderosa Road is chip-sealed now, used to be dirt. The next driveway up the road is the one for Boondockers to use--it's more level, this one is sloped. Eventually there will be a sign back there to make it easier to identify. 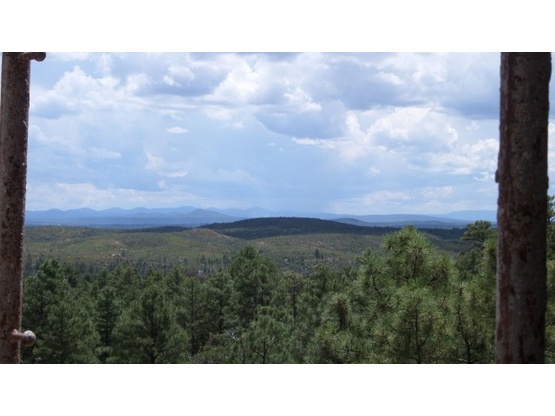 View of the Blue Mountains toward Alpine & Greer and the ski area, Sunrise. 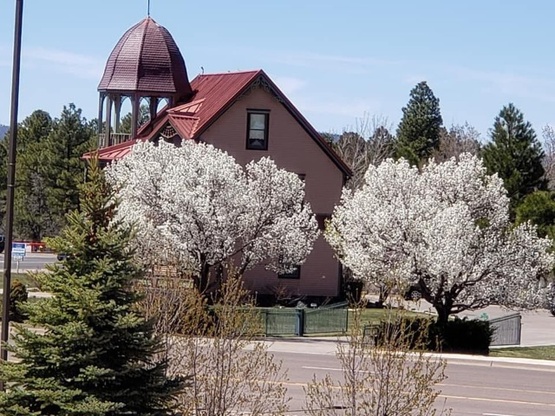 Modern Victorian on the corner of Deuce of Clubs and Clark Road (hwy. 260) in the spring. 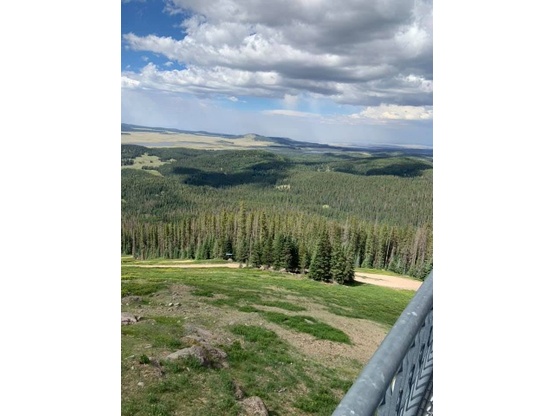 View from the ski lift at Sunrise ski area. 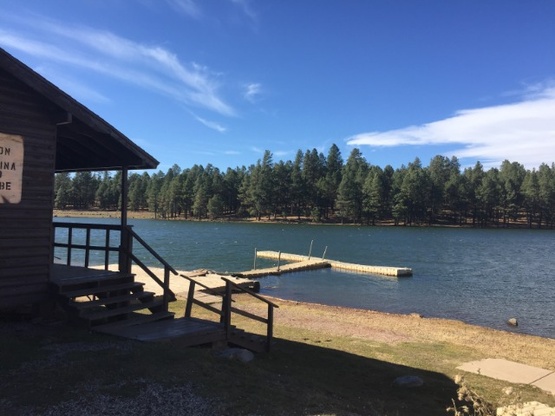 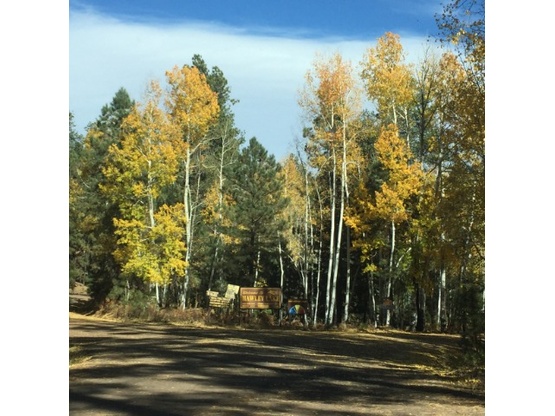 Fall drive up south of Show Low at higher elevations the aspen grow around Pinetop, McNary and the ski area.

We're located in a subdivision called Timberland Acres just 8 miles outside of the town of Show Low off of Hwy.260. We have a number of lakes in the area as well as hiking trails. We're just an hour's drive or less from Petrified Forest NP in Holbrook and the Painted Desert. Fort Apache is an easy drive as well. The Grand Canyon is 3-4 hours away so it's a 2 day trip most likely. We're close to Sitgreaves National Forest on the Mogollon Rim, trails for quads and ATV riding in the area. Horses are welcome. We're in the tall pines/oak forest with cedar and juniper trees at 6300' elevation our summers are mild--we get snow in the winter, so best to check the weather.

No smoking, in summers when driving in the area be careful of dragging safety chains as sparks start fires.
We do have an enclosed fire pit that can be used--not exactly a fire ring. We have a dog-run that's fenced for dogs to be off leash.
Generators off by 10 p.m. is appreciated.
No rush to leave, we're retired, the patio, picnic table area can be used and enjoyed. Our dog may bark at you for a bit until she realizes you're okay to be there--we have a young dog, 1 year old—Peaches (the barker) is in the house quite a bit or in and out.

State highway turn-off and then paved to the driveway which is cinders or gravel. Good access---but not a lot of maneuvering space, probably have to back in or out using driveways across the road from our house. Best for units under 30' probably due to turns--in the trees.

We have a 1 acre lot with 3 driveways-- and the main drive in the middle has extra parking spaces. We have our 25' trailer in back, but an RV can park in front of that and is probably the best place for water hookup. We don't have a septic hookup, just power & water. Tow vehicle can also fit in that driveway or in our middle driveway. 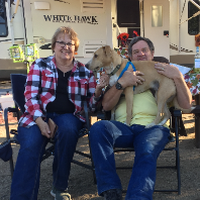 I contacted DianeTomAZ on 9/10 for a stay 9/15 and again for a return trip 9/18; both were accepted. While driving to Arizona on 9/15, my wife contacted me and said I needed to read my email concerning my planned stay in Arizona that night. The host stated in an email that they parked a friend for a few days in the space they had for me, but they had another space available, and to contact them when I was about a half hour away.

I called the host a total of five times and got a message that they were not available each time. I located the host address and knocked on their door. A gentleman answered the door and said that he thought I was coming the next night; I said no, I had requested Wednesday 9/15. He said OK, and pointed down the road and said I could park in the driveway. I wasn't sure where he meant, so he and I walked down to the driveway. I said it looks pretty steep and he said it flattens-out towards the top. I also said there is a fairly large branch too low for my van before the drive flatten-out, and he turned away and walked back to the house.

I attempted to back up the drive, prior to the tree branch, but it was far too steep uphill and my trailer hitch dug heavily into the gravel (24' Sprinter van). There was no way to get up this incline and past the tree branch where the drive did flatten-out a bit. I realized the drive was steep enough that I would have needed a foot or so of leveling blocks under my front wheels to get close to level - no way. I called the host a sixth time, got the message again, and left a message that the driveway would not work and that I left.

I understand that things come up. I don't understand expecting someone on the road, driving to the host site, to be reading emails along the way. The host apologized for the 'mix-up' and told me the 'regular' site would be available for my return trip on 9/18; I told them thanks, but that I would find another place to stay.

We really enjoyed our stay here. The hosts made us feel right at home and were not only incredibly accommodating but open minded and very supportive of our lifestyle. Our dog fell in love with their mountain pup, peaches, and he’s gonna give me attitude till’ I take him back for another visit. Lovely hosts lovely property and a beautiful drive to it!

Hosts are accommodating and very gracious!

Great stay so far, and such a beautiful/peaceful area. Would highly recommend!

Slice of heaven in the pines

Great hosts with lots of local information. Gave us location of a hiking trail we walked two days we were there. About 3 mile round trip and 350’ elevation change, it was great with great views.

My dog Charlie and I were pleasantly greeted by the host and their dog Peaches. Very peaceful dead end street in a neighborhood with large lots and trees for shade. Lots to do, in and around Show Low. Host provided me with area maps and brochures. Thanks for a great stay, hope our paths cross again.

DianeTomAZ were excellent hosts. First they helped us back in our travel trailer safely. Secondly, we receive pleasant conversation and a handful of local site brochures. Finally, they gave us space which allowed us to rest our road-weary bones. Great stop!

Thank you for being accommodating

I stayed at Diane and Tom’s for two nights and enjoyed myself so much! They helped me get oriented to the area - even gave me a map with lots of local hikes. We ate dinner together one night - both Tom and Diane are interesting people with some fun stories. They went above and beyond with their hospitality.
I appreciated meeting Down Abe’s sister as well - another solo female camper.
I feel I made friends the last two days.
Boondockers Welcome is exceeding all expectations I had when I joined.
Oh - and the ponderosa forest region of AZ is really beautiful. Great weather and fantastic hikes all over.

Timberland acres was a beautiful quite peaceful place with elk, deer and wild turkeys walking past several times a day. Our hosts were friendly and kind and offered brochures and maps of the area. I tried to get some replacements for them at the chamber in Show Low but they were closed till 2021. Thanks for the great time.

Had a wonderful time in Show Low, and our hosts were truly exceptional. They provided us with brochures of the area, and my wife fell in love with Peaches, their pup. We were able to put some water in our tank, and I gained some good info on the solar setup they have on their home.
Our hosts are preparing for a trip of their own, and we can only hope they have as good an experience on the road with Boondockers Welcome as we have had with great hosts like them!

We had a nice stay outside of Show Low. Diane and Tom greeted us an offered water for filling out tanks and 110 electric hook-up. We had a nice walk with our dogs in the neighborhood. Our 28 ft. Trailer was a bit tight and we had a bit of a hard time maneuvering it in so we could put our slide out. All in all a nice stay!

Go Solar and Be Free

Our Hosts made us welcome and comfortable. There are several attractions and lots of outdoor activities in the local area. Our Hostess had brochures for many of the attractions. We had two full days of touring, exploring, hiking. Thanks to our Hosts for a great stay.

A quiet night in Timberland

Diane and Tom were very friendly and accommodating, even chopping off a few tree branches to allow for our 25 ft RV. They also provided electricity and water. It was very peaceful and quiet. Thanks!

had a great stay, thank you. Had fun playing with the dog. Am gonna miss her! Enjoyed visiting and sharing information. Hope to stay in touch! Thanks again!