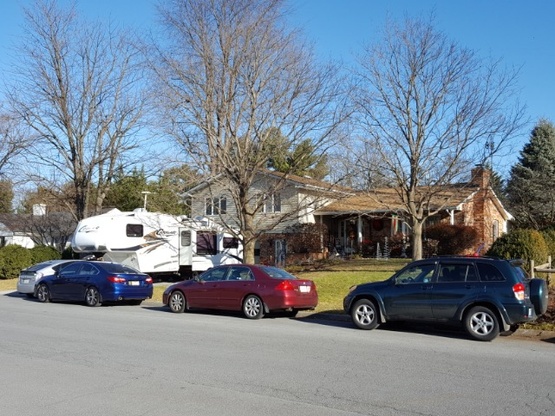 Parking is curbside in front of the house. The fifth wheel occupies most of the driveway. I will run either 15 or 20 amp service to the curb.

We are located in the city of Winchester. Parking is curbside in front of our house. It is a quiet residential street.

None. This is a paved city street.

Tow vehicle parking is at the curb.

We are located near the north entrance to Shenandoah National Park/Skyline Drive. There are several museums: (1)Museum of the Shenandoah Valley; (2)Shenandoah Valley Discovery Museum (children's museum); (3)George Washington's Office Museum; (4)Stonewall Jackson's Headquarters Museum; and (5)Shenandoah Valley Civil War Museum. Winchester was home to country music great Patsy Cline. The Patsy Cline Historic House and grave site are open to the public. There are several Civil War battlefield sites within a short distance of Winchester. One of the few remaining drive-in movie theaters is a mere 6 miles away. 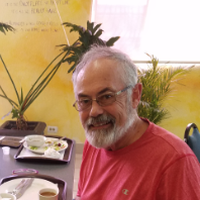 Extremely warm friendly gracious host. Welcome Us and made us feel like family. Highly recommended!

Longdistanceman was well prepared and eager to help. He even had leveling boards waiting for us. We had a pleasant stay and a nice chat.

Long-distance man was wonderful. He met me on the outside his driveway. Nice flat safe space. Hooked me up with power. What a beautiful first time Boondocker Welcome experience.

It was great to feel welcomed during the holidays!

Longdistanceman and his family welcomed me even though it was just days before Christmas. I parked in the driveway and they generously provided power which was great since the nights were in the 20's. His sweet little 5 year old grandson invited me to attend his Christmas Choir where he sang with his classmates and did a great job! Longdistanceman showed me some of the city sights and as his profile states, he is a retired air-traffic controller. Since I am a pilot, we had lots of fun conversations. I was invited to dinner one evening and Longdistanceman cooked some of the most delicious salmon I've ever eaten which matched the yummy salad prepared by his daughter! The neighborhood is very nice, well-kept, and I felt very safe and welcomed.

Had a most enjoyable stay here! Long-distance man is a wonderful host and we found we had quite a bit in common. Hope we might run into one another again! Neighborhood is pleasant and quiet. Thanks very much for the wonderful hospitality!

Such a kind and generous host!

We very much enjoyed our time with Longdistanceman and his family. We had a lovely visit and very pleasant conversation the evening we arrived, and the following morning over breakfast. Longdistanceman is a very kind and generous man — we very much hope our paths will cross again in the future. Thank you for making us feel so welcome in your driveway — and in your home!

My pup and I had a wonderful stay with Longdistanceman and his family! We bonded over travel stories and hiking trails almost immediately. Could not have been a better first experience with Boondockers Welcome. I hope to see them again soon!

What a great guy and a great place !

We stayed at Tim’s place last night. He was there waiting for us even though we got there later than expected. Tim is a super person, very friendly and open to the world. He has traveled extensively and he knows how to be a welcoming person. The street we stayed at is very quiet and super clean and the neighborhood is perfect. We exchanged glasses of wine and had a good chat together. This morning, he even had bagels for us for breakfast and to go on the road. Thanks a lot Tim, you made our day !

A very generous and kind man

My husband and I spent a very pleasant night with Tim in Virginia!! He could not have been more welcoming!! His home is not far off the highway and very quiet at night. We left feeling that we had acquired a new friend and safe haven from the cold this year is presenting. We are very grateful!!

We enjoyed staying at Tims as we shared a few stories over nice meals, and even met another boondocker staying there. We did have 15 amp electric which was a bonus, and stores were 5 minutes away. I have only praise for this fine host who really took care of us. Thank you Tim.

We were meeting up with friends in Winchester, VA and were arriving the night before. We were just looking for a place to spend the evening, so we'd be close by the following morning.
TruthAndTravels agreed to host us and suggested we stop in for a few moments to chat. Four or five glasses of wine later, we had met the grandchildren, cats, et al. They were most gracious hosts, and turns out we had lots in common. Great people - hope to cross paths with them again sometime.

Parking was on the city street in front of their house, as their fifth wheel takes up most of their driveway. Nice and quiet neighborhood.

TruthAndTravels were the most welcoming of hosts. We arrived at dusk after a long day of travel and hoping for a quiet place to spend the night. Their home was perfect for us on a quiet residential street in Winchester PA. They and their son-in-law helped us get set up for the night and provided electrical hookup (15 amp) which was wonderful to have. Although not expected, we were offered breakfast and enjoyed visiting with our hosts before continuing our journey home to Canada. We highly recommend TruthAndTravel's boondocking location. Friendly, warm and welcoming ... wonderful to spend time with! Thank you.

Offered us to visit before joining Boondockers Welcome

We were camped at French Creek State Park in Pennsylvania in August this year and that's where we met this lovely couple, their Daughter, her husband and son. After chatting for a while, they were aware that we were soon heading to the Skyline Drive and Blue Ridge Parkway via Winchester VA, they suggested that we might like to visit with them at their home as we would be in the area. I promptly went to our RV where we carry some brochures that explain all about the Boondockers Welcome website and how to join. They thought that was a wonderful concept and as a result we now have another member of B.W. We were treated like family while visiting for a few nights and enjoyed meeting several family members.
This guy has hiked the Appalachian Trail and is a wealth of knowledge in that regard.
We offer our property to host visitors in Queensland Australia when we are at home and if these guys can arrange a trip Down Under as they would like to, they will be very welcome guests.
Cheers, Woodgate Wanderers